We have a network of highly competent land surveyors throughout the Commonwealth of Virginia to complete ALTA Surveys for your project. Call Keith at 800-798-9540 and let him know which city or county the project is in.

ALTALandSurvey.com is owned by J. Keith Maxwell. He formed the network of Surveyors in the state and manages this website. Keith holds a Professional Land Surveyors license and Professional Engineers license in the state of Alabama. He has over 30 years experience with all types of commercial land surveying and commercial land development projects. Over the last 28 years he has completed numerous ALTA Surveys. Call 800-798-9540 to speak with Keith about an ALTA Survey in Virginia.

Keith works with a network of licensed Land Surveyor Associates all around the state. We will select the closest one to your location, AND the best for the job. Keith can also guide you to Civil Engineering services if you need them for your project.

Our Virginia surveyors take customer satisfaction seriously. We want to know your requirements and goals for the job. Then we’ll work to complete the project to meet your approval. If you have questions about the process or the survey, we have the answers. We’re eager to help you. We will listen to your questions, and then do our best to resolve them when you call us. We will also help to develop the scope of work for what needs to be done on your project and do our best to meet those expectations.

An ALTA Land Title Survey is completed based on the “Minimum Standard Detail Requirements and Accuracy Standards For ALTA/NSPS Land Title Surveys.” This ALTA survey standards document was developed and is revised on a regular basis by a combination of Title industry (the American Land Title Association) and Surveying industry (the National Society of Professional Surveyors) professionals. The latest version of this document is the 2021 revision.

Since ALTA Surveys take more time and effort, these surveys typically cost more than a survey done according to a particular state standard. I should point out that if the state standard is more restrictive on a certain point, then the most restrictive standard rules. 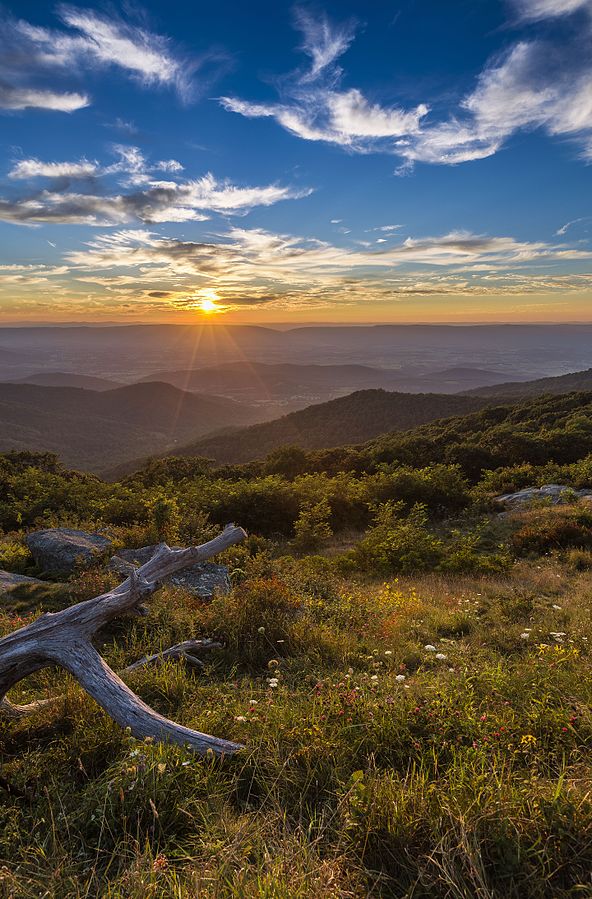 I see ALTA surveys priced from 50% to 250% more than a comparable boundary survey. This depends on the items checked in “Table A – Optional Survey Responsibilities and Specifications.” This table adds additional or specific tasks to the surveyor’s scope of work.

One item that is usually included with most all ALTA survey requests is Item #1, monuments placed. Virginia Surveying standards include this and, in my opinion, all surveys should, but the ALTA survey leaves this optional unless the item is checked on Table A.

In regard to this, one of the things I appreciate is that the client is “supposed to” not only fill out this Table A but also to furnish title documents to the surveyor BEFORE he starts the survey. In practice we rarely get the title documents until we issue the first draft of the survey. At that time the documents are sent to us and we are asked to revise the survey and show them. While this is not the way its planned, at least we have the chance to review the documents before issuing the final version of the survey.

Coastal Plain/Tidewater
A low-lying Coastal Plain spans the eastern seaboard from New Jersey to Georgia, extending westward from the ocean to a point where the flatness of the landscape stops and in Virginia the terrain rises 300 feet above sea level. 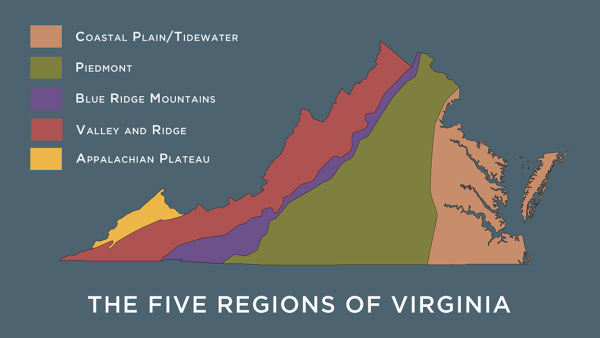 Piedmont
“Piedmont” is a French word meaning “foot of the mountains.” The American Piedmont extends from Pennsylvania to Alabama. Virginia’s Piedmont is separated from its Coastal Plain by a “Fall Line,” where rivers, small waterfalls, and rapids cascade or “fall” off hard, resistant rocks as they make their way to the ocean. Those rivers give the state its unique geography that has strongly affected its history and economy. The “Fall Line” runs through the port cities of Alexandria, Fredericksburg, Richmond, and Petersburg—beyond which the water is too shallow for deep-bottom ships to navigate.

The Piedmont is Virginia’s largest region. It is rolling hill country that gently rises to 1,000 feet, then doubles that height at the foothills of the Blue Ridge Mountains, where its topography becomes more rugged.

The Blue Ridge region runs nationally from southern Pennsylvania to the northern tip of South Carolina and Georgia. It is a rounded mountain range that looks blue from a distance. Its rugged appearance resulted from collisions there long ago of the most powerful geological forces. In Virginia, the rocks that form its core date from 1,000–1,600 million years ago; the oldest rocks in the region are more than a billion years old! Mountains were formed when rocks were pushed westward over the top of rock layers by an enormous force that was generated when two land masses to the east were squeezed together. Those two land masses later were ripped apart to become the continents of North American and Africa, an ocean formed, and as its sea level rose, sedimentary rocks were deposited in the Blue Ridge. That was 700–750 million years ago. The folding and faulting of this process of mountain formation left rocks deformed through heat and pressure. The continents were shoved together and split apart many times 245–540 million years ago, causing rocks to be deposited on the eastern side of the Blue Ridge.

The Blue Ridge Mountains are covered with thick forests and rise to elevations more than 4,000 feet in the central and northern part of the state. Virginia’s southern Blue Ridge is a broad, relatively flat region, but the tallest peak in Virginia, Mount Rogers, is there (5,729 feet high).

Virginia’s Valley and Ridge region is part of a gigantic trough that runs from Quebec to Alabama and is called “the Great Valley.” Virginia’s portion is distinctive for its size (greater than that of any other state); its narrow and elongated parallel ridges (3,000–4,000 feet high); flat, lush valleys with gentle topography; and caves, caverns, and hot springs. The region developed its identity when bands of sedimentary rock that had been formed 252–541 million years ago were disturbed by a continental collision that produced a fold and thrust belt. Bands of rocks were caused to fold and move westward along thrust faults. They eroded differently, causing both ridges and valleys to be created. Sand and gravel washed down from the mountains of the Blue Ridge region; the sand and gravel in time turned into rock. At the end of this complex evolution, the surface of the Shenandoah Valley in central and northern Virginia emerged as both picturesque and fertile. Sandstone in the easternmost portion was overlain by carbonate deposits that in time produced caves and caverns in the subsurface.

Cumberland or Appalachian Plateau
The southwestern portion of Virginia is part of the great Appalachian Plateau that stretches from New York to Alabama. Virginia’s plateau is the smallest of the state’s five regions and contains only three counties (Wise, Dickenson, and Buchanan). The visible slope at its eastern edge gives the impression that it is a mountain range, but instead it is an eroded plain of sedimentary rock that has a high elevation of 2,000 feet above sea level—higher than that of the Valley and Ridge region. Thrust faults from the Valley and Ridge formed huge folds of rock beneath the plateau that failed to reach the surface. What resulted was a hilly and rugged terrain, strongly dissected by stream erosion, with many valleys and some portions of flat land. The upper layers of the plateau are covered with forests and are rich in coal, natural gas, and petroleum formed 250–540 million years ago.

So, if you have a commercial parcel or a large multi-family residential complex, you should consider asking for the ALTA standards to be used.

You should also probably do this if you are considering the purchase or development of a parcel outside your state. Most of the banks will require this if you ask for a loan on this type property, but I recommend this even if the bank doesn’t require it.